Update: a recent agreement has taken place which sees 50017 being sold onto preservation to the Great Central Railway. 50017 is safe, although it’s mainline equipment will be removed.

Railway enthusiasts are saddened by recent news that 50017 ‘Royal Oak’ could soon be scrapped, following word of a recent Facebook post by Boden managing director Neil. 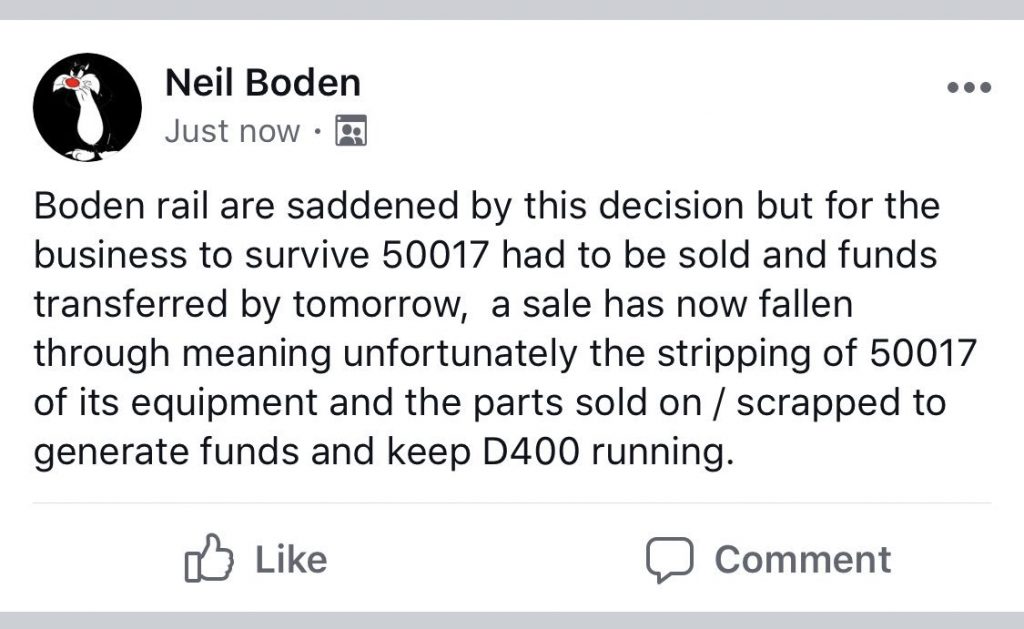 “Boden Rail are saddened by this decision but for the business to survive, 50017 had to be sold and the funds transferred by tomorrow, a sale has now fallen through meaning unfortunately the stripping of 50017 of its equipment and the parts sold on/scrapped to generate funds and keep D400 running.’”

The news comes as a suprise to many, as 50017 has recently been seen in good condition, and attended the 50s @ 50 gala at Severn Valley Railway last year.

Unfortunately, maintaining historic locomotives such as the class 50 is very expensive work so we respect Borden’s decision to keep their other locomotives running from the parts from 50017. 50017 is mainline registered, in addition to 50050 (D400) ‘Fearless’ with several others also being mainline registered. A total of 18 class 50s have been preserved.

Class 50 locomotives are popular among railway enthusiasts, with many mainline certified. What’s more, locomotives 50007 + 50049 are being painted in to GBRf livery and will receive a new lease of life with work on the mainline.