Over the past couple of years, a lot of work has gone into Newhaven Marine, with the old station sidings having been completely relaid and ballasted.

More recently, January 2020 saw DB Cargo driver training taking place, with 2 light engine moves into the Newhaven Marine platform and out, working from Hither Green. In the below photograph, you can see one of the DB Cargo driver training moves leaving Newhaven Marine siding, towards Newhaven Harbour where the level crossing has been replaced. In the background, you can see a conveyor which when complete, will carry aggregates from Newhaven port where ships berth and unload, into the quay terminal.

As of February 2020, new sidings have begun being laid at Newhaven East Quay. The map below shows the path that which the Marine terminal will be laid. The blue pinpoint shows the point which the below photos were taken of the new sidings being laid.

At the north of the map shown below, there is a bridge across the river. Walking south, the footpath progresses around to the left to the blue marker shown. It isn’t clear yet whether the footpath accessing the blue marker will still exist after the port access road (shown in red) is finished. It’s worth noting that there is a new footpath that runs directly south of the bridge across the river but it isn’t publicly accessible yet.

Further to last weeks photos, a look back this week shows a longer shot of the marine and quay. The two sidings merge into one at the far end of the photo. Following that, a level crossing.

We’ll share more photos of the Newhaven Marine developments and port access road when they form so check back later this month.

Despite many indoors, front line workers continue to crack on with work at Newhaven Marine.

Noticeable progress includes implementation of the new bridge which carries the port access road across the railway line. The bridge was recently lifted into place bridging the gap between The Drove, Newhaven, and Newhaven East Quay industrial estate including the area of Newhaven Marine aggregates terminal. 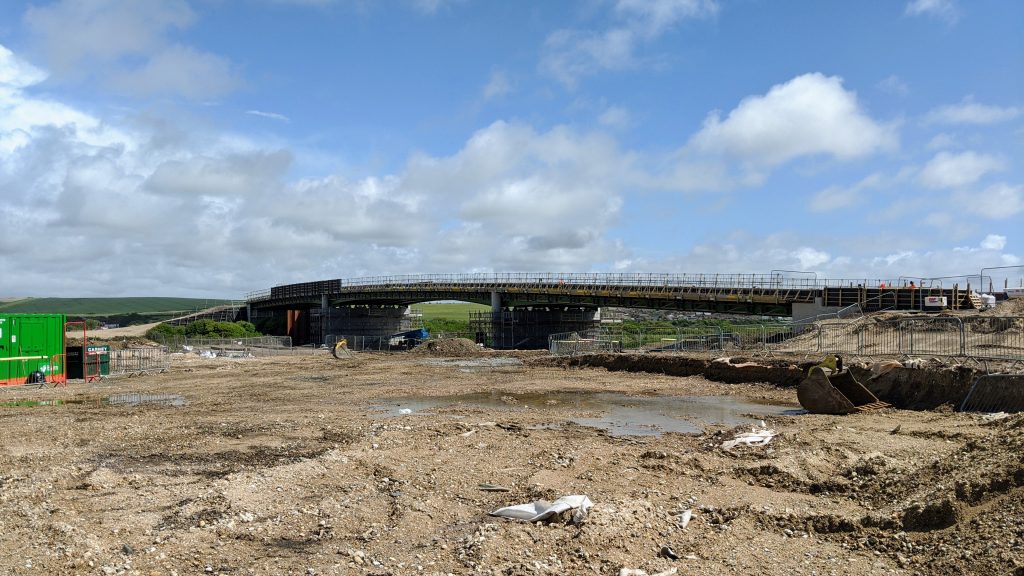 Above, work continues on the port access road. Below, the bridge now crossed the railway and river. 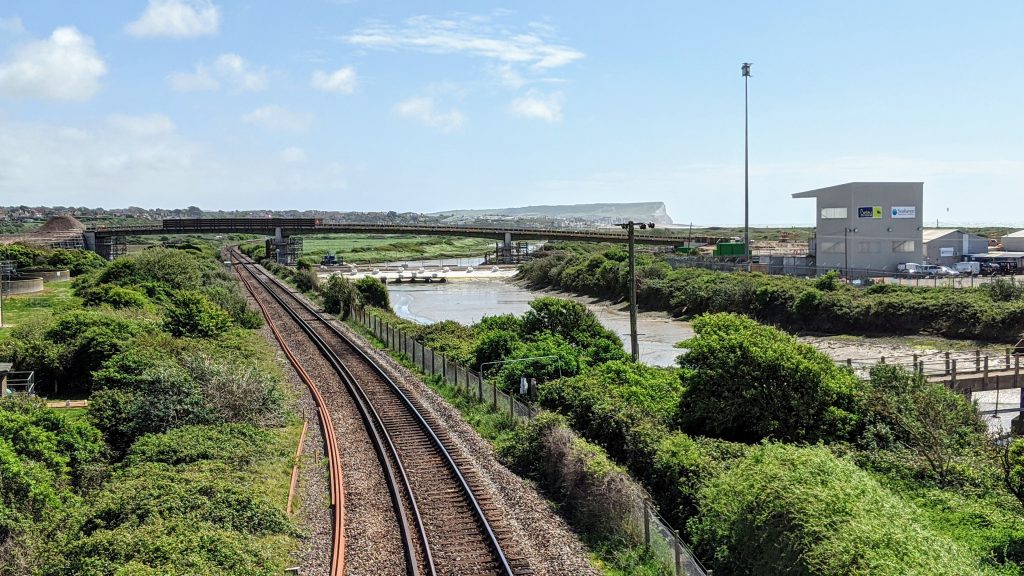 Visible progress from the viewpoint the photograph was taken, seems little, but no doubt most of the work is going on behind the level crossing, to connect the new sidings to Newhaven Marine. 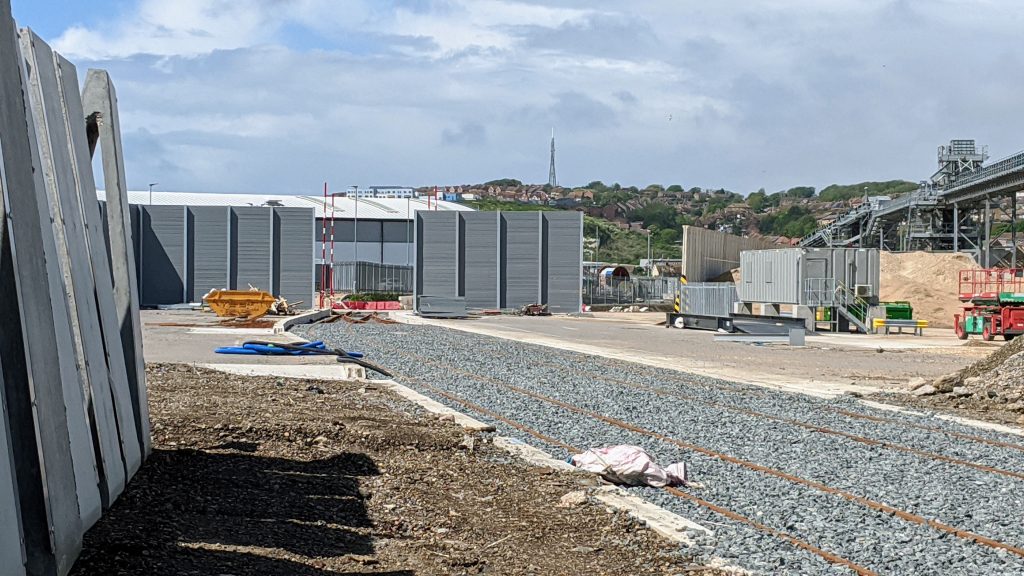 As seen in the photograph above, compared with those from February, large walls have been constructed and the level crossing is in place.

Still no sign of any loading hoppers or buildings, either it’ll be loaded on the other side of the level crossing, or it’ll be done by grabber similarly to Newhaven Town Yard.

With the port access road to the east and the sidings to the west, I wouldn’t be suprised if the existing dirt track is removed and replaced with the new footpath below. Currently the below footpath is inaccessible to the public as a fence blocks the way. Not in any above photos, there was a second fence obscuring the below shot but it has since been removed. It’s possible the below footpath will use the siding level crossing for access to the Seaford <>Newhaven Beach? 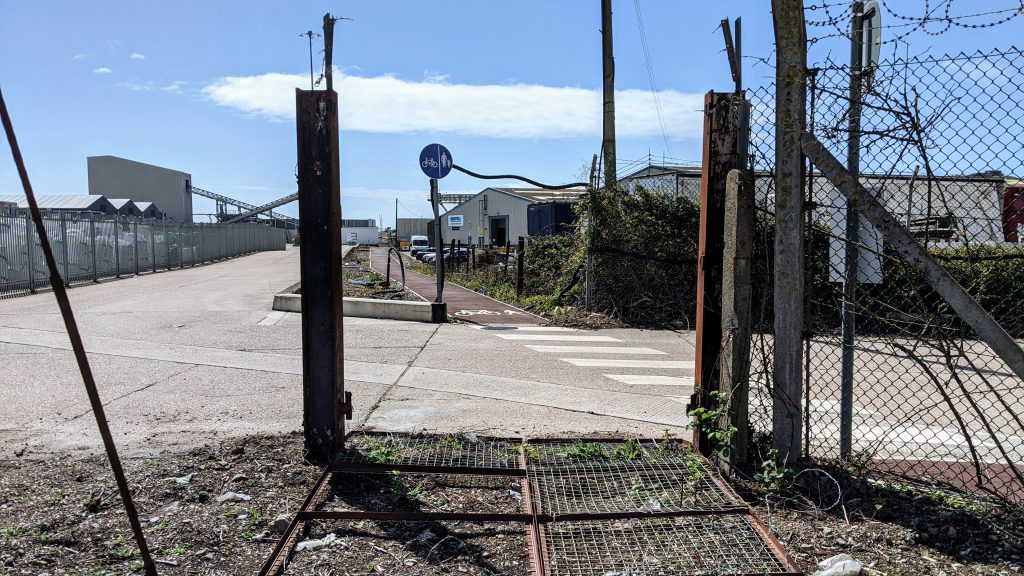 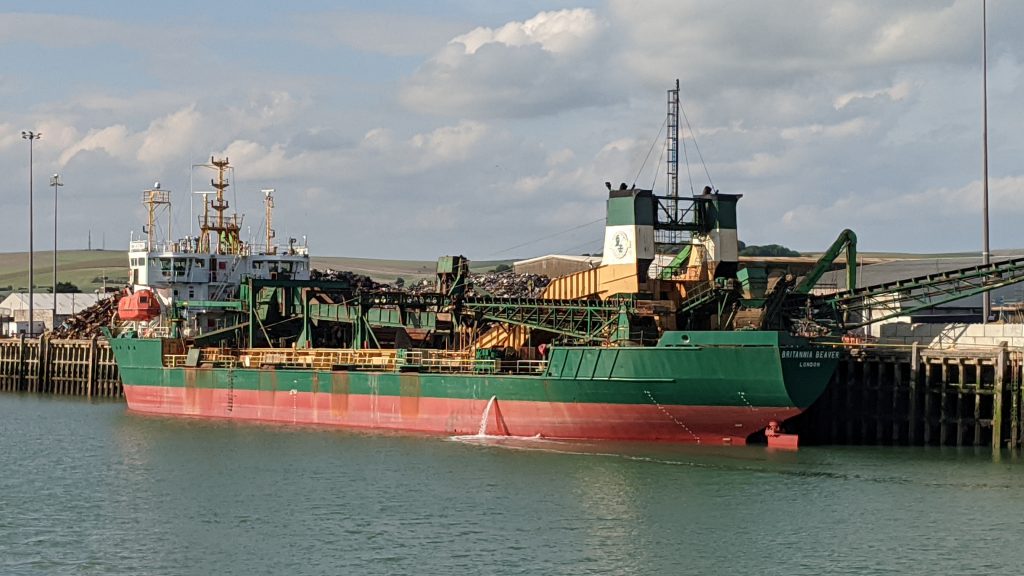 Above:Brett – owned dredger ‘Britannia Beaver’ unloads it’s marine dredged aggregates at Newhaven Marine. Once the rail swings are completed these materials will be loaded onto trains. 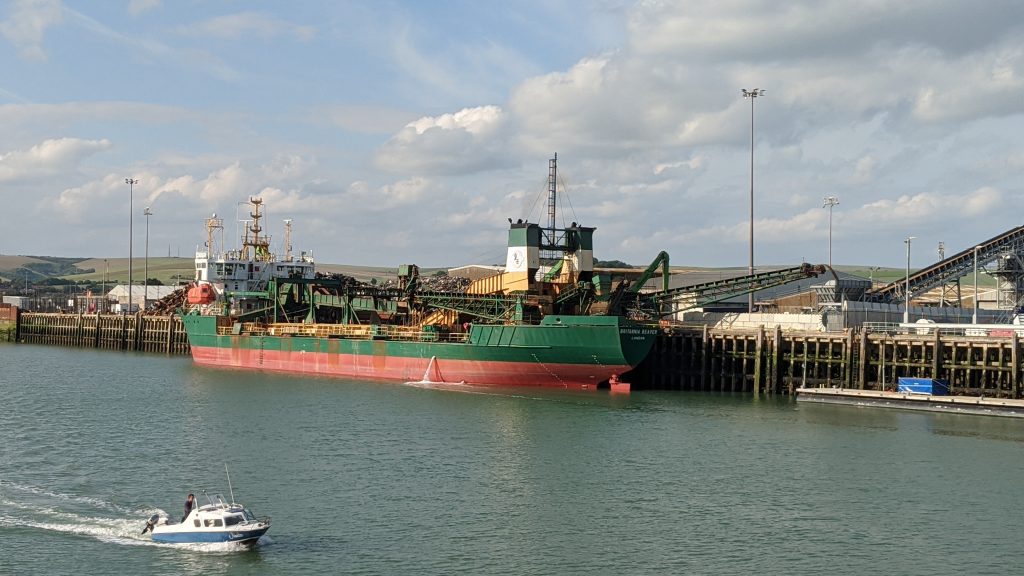 The first DB Cargo operated aggregates train ran on Thursday 18th June 2020, with 66113 in its Key Workers vinyls. You can see photos of the first train into Newhaven Marine here.

Aggregates are loaded by a truck rather than by a conveyor. 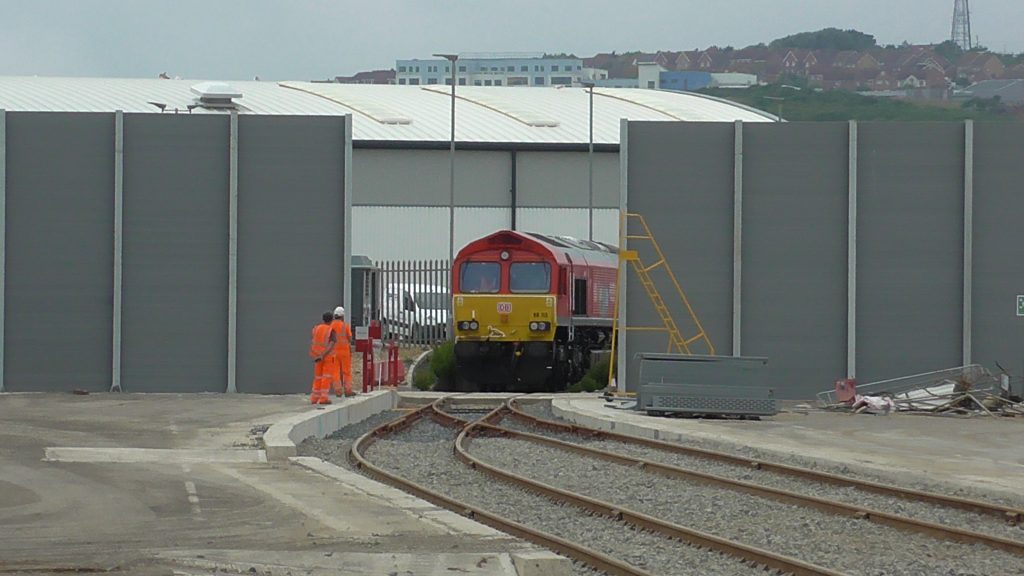 Thanks for sharing these Matt very interesting

On my first visit to the beach which must have been getting on for 20 years ago I found disused sidings here. They look to be in pretty much the same place although there was also a ground-frame so probably had a run-round rather than two stub sidings.

I think I have some photo’s somewhere.

Although I recognise aspects of it I can’t quite work out where the very bottom photo is taken – I don’t recognise the slab road / zebra crossing, are you taking the picture through a fence?

Hi Lee, yes the photos were taken from through a fence. Just opposite the small bridge that crosses the creek after going over the footbridge just a short walk from Newhaven harbour station. The zebra crossing hasn’t always been there, but it’s been a few years since it was installed. No public access yet however.

Very interesting. It will be a great shame if the footpath behind the new siding is removed. I hope that this doesn’t happen. I am also struggling to work out the location of that zebra crossing with that view.