Newhaven Marine, once a station which served Newhaven’s ferry port, has been closed to the public for a number of years and until recently, saw only several Empty Coaching Stock non-passenger services a week.

The new aggregates terminal at Newhaven East Quay branches off from the Lewes to Seaford branch at Newhaven Harbour. The platform and old station area serves as a run around loop for locomotives, before backing the train into 1 of 2 parallel sidings. The rake of wagons is loaded with marine-dredged aggregates and sand, imported by a suction dredger such as Brett-operated Britannia Beaver boat. Following loading of half of the rake of wagons, the consist is split, and those loaded wagons are moved into the adjacent siding, out of the way. The remainder of the empty wagons is then shunted into the loading siding.

Whilst a number of trains have used the Marine platform area for reversals , including Southern class 313s and 377s, as well as a variety of engineering trains and tampers to renew the sidings, today was the first official commercial rail service into the new yard. 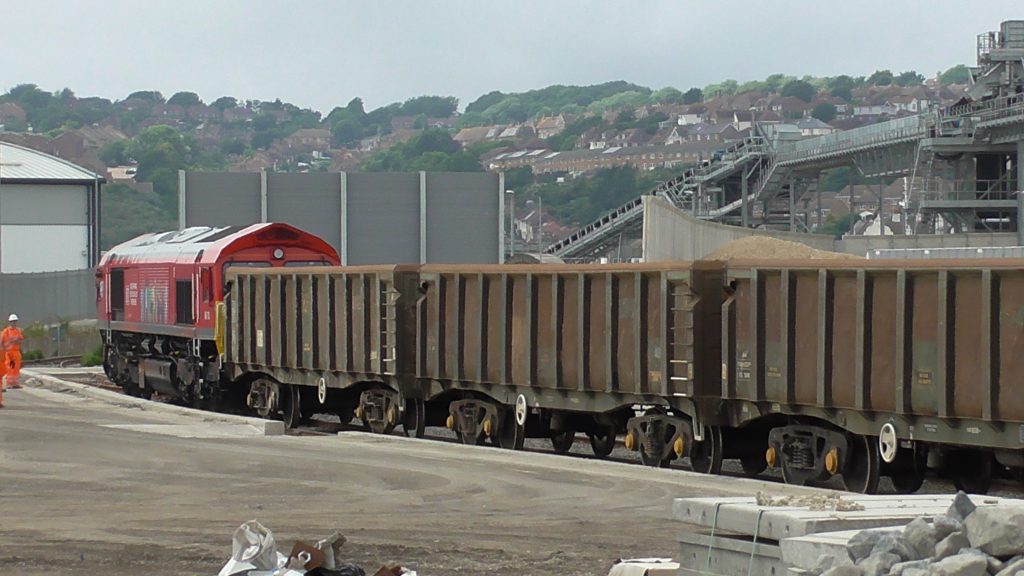 Correspondents of the Rail Record website have been following the development progress of Newhaven Marine sidings, showing a selection of photographs from the area over the past few months.

You can watch the video of the first train arriving into Newhaven Marine on Youtube and below:

Timings for the first aggregates train into Newhaven Marine:

There are paths into and out of Newhaven Marine Monday through to Saturday, but all paths are in the Working Timetable and run only when they are required. Therefore, whilst there are multiple schedules for each day of the week, only some will run. Live train times can show when a service is running – just search for “Newhaven Marine Ag Tml Dbc”.

Timings for the first train out of Newhaven Marine: